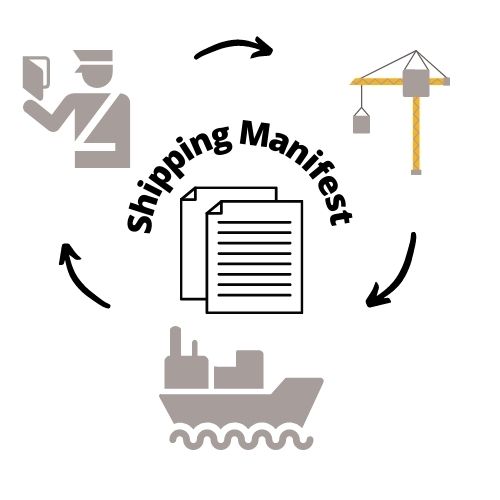 Shipping Manifests may present themselves as simple document, but it is one of the more complex documents to prepare. This is especially the case when the cargo carriers ships unit load devices such as containers. In this article, we will guide you through the process of preparing a shipping manifest, as well as the uses of a shipping manifest.

So What is a Shipping Manifest?

A Shipping Manifest, or cargo manifest, summarizes all the cargoes that the vessel carries on board.

This summary provides Customs Officers an overview of the cargoes on board and takes necessary steps to assure that the cargoes onboard are safe for the port operators to handle. If the cargo is declared as hazardous, it would appear on the manifest, and safety measures will be taken.

The Shipping Manifest summary of cargoes on board also allows Customs Officers to undergo risk assessments on the cargoes before allowing them to enter the country. Should there be any potential risks involved, the customs officers can decide to examine the cargo in the Customs Examination Station (CES).

Shipping Manifests not only summarizes transported goods, but also details the bunker fuel that is laden on the vessel.

Below you will find some examples of details summarized on a shipping manifests: –

2. Port of Loading/Port of Discharge

The information above describes what the users of the manifests are looking for. The users intend to know the total weight of the laden cargoes, who is the contracted parties of the carriage, and also the intended destination of the vessel.

There is more to unravel about a shipping manifest, do read on if you intend to learn more!

Who Prepares the Shipping Manifest?

Principally speaking, the entity that provides the transportation service is the one responsible to prepare a shipping manifest.

In a much broader sense, the Vehicle Operated Common Carrier (VOCC), can “manifest” in various modes. Regardless whether the mode of transportation, once the transportation crosses a border from one country to another, the vehicle operator has to prepare a transport manifest.

On the other hand, what if the transport provider is a Non-Vehicle Operated Common Carrier (NVOCC)?

We use the term VOCC and NVOCC very often, and it’s worth mentioning briefly what an NVOCC is. An NVOCC is a service provider that issues contracts of carriage but does not own the mode of transportation. These select groups of entities are service providers such as 3PL (third-party logistics providers) or freight forwarders.

While NVOCC service providers technically do not issue a shipping manifest. But, they are required to inform the customs officers, port operators, shipping agents (VOCCs), and other governing agencies of the details of the shipper and consignee of the cargo.

There is also a complication where a house bill of lading is involved. A shipping manifest details the shipper and consignee with details on the Master Bill of Lading in mind. Therefore a shipping manifest would not have the actual intended owner of the goods transported, but rather the entity that is under the VOCC’s contract of carriage.

The Intended Users of the Shipping Manifest

So far we mostly focused on cargoes that are loaded in a unit load device, such as a shipping container. But that is only a proportion of the cargoes transported globally.

Cargoes that do not fit in a standard 20’ container or a 40’ container are commodities such as: –

These cargoes require special equipment that only port operators can provide. Therefore, port operators are essential users of the shipping manifest.

We’ve touched in brief about this so we will only glance through.

As we all know, certain cargoes are Schedule I prohibited, such as firearms, explosive devices, illicit drugs, and also byproducts of endangered species. Customs officer will perform the aforementioned risk assessments to determine the likeliness of those cargo being contraband cargoes.

Secondly, Customs Officers are also on high alert on vessels coming from embargoed countries. Some examples are Cuba, Iran, and North Korea. The shipping manifest, among other data elements provided to the customs officer, will have details about the vessel’s voyage as well.

Federal Agencies also have vested interest on the to-and-fro of regulated cargoes.

Waste cargoes is a good example. We will quote an excerpt from the EPA website: –

“Uniform Hazardous Waste Manifest, a form required by EPA and the U.S. Department of Transportation for all generators who transport, or offer for transport, hazardous waste for off-site treatment, recycling, storage or disposal.”

How Shipping Manifest Details are Compiled

Let’s take a step back and look at a few figures for a moment, a vessel MSC Hamburg is capable of carrying 16,000 TEUs per trip.

For the sake of this example, say a shipper has 1 container contracted with MSC’s shipping agency. That is equivalent to 16,000 different shippers and consignees per shipment!

Not to mention, there are 16,000 different types of cargoes details that need to be accounted for in every voyage.

So how does the shipping agent compiles all this information into a neat shipping manifest?

The answer is simple: by “crowdsourcing” the data.

Let’s look at this from the perspective of documentation. In an export shipment, the exporter firstly issues a shipping instruction to the contracted transport service provider.

The nature of sea transportation is that not all data elements is ready at one specific point. Container numbers can only be ascertained after the depot has dispatched an empty container. In addition, cargo details such as weight can only be validated by SOLAS submission.

Therefore, this is why we describe a shipping manifest as a summary that is easy to understand, but complex to prepare.

Manifest and Bill of Lading’s “Said To Contain”

Firstly, it’s worth explaining what “Said to Contain” or STC means and where would it appear in shipping documents.

We’ve touched on how a vessel could potentially carry up to 16,000 TEUs of containers in a single voyage; we’ve also touched on how shipping agents “crowdsource” their manifest information from shippers and consignees.

It is impractical for shipping agents to vet all their customer’s cargo load and monitor what is stowed into the container. The best method is a trust-based system where shipping agents place the responsibility of declaring the cargo stowed to the shipper themselves.

This is done so in order to limit the liability of shipping agents from penalties of shipping contrabands across the seven seas.

That is why customs officers play an important role in performing both routine and non-routine checks to see whether cargoes transported are genuine.

Let’s face it, gone are the days when all documents are handwritten, and information is physically passed on to another person via fax or a piece of paper.

Right now, manifests are submitted to customs electronically. The method by which the electronic manifest is submitted varies in each country.

As most countries are participating nations of the World Customs Organization (WCO), the framework with which the manifest submission and gathering are based on standards set by WCO.

According to the WCO website, data transmission, to-and-fro customs officers are based on the SAFE Framework of Standard to Secure and Facilitate Global Trade.

The more recent development in software approaches to information transmission is the CTS Solution or the Cargo Targeting System.

Of the many functions of the CTS solution, the chief function of it is to gather and store electronic cargo manifest data.

You can read more about the WCO CTS system here. It is only a nice-to-know slice of information, as the users of this system are mostly port operators, shipping agents, and customs officers.