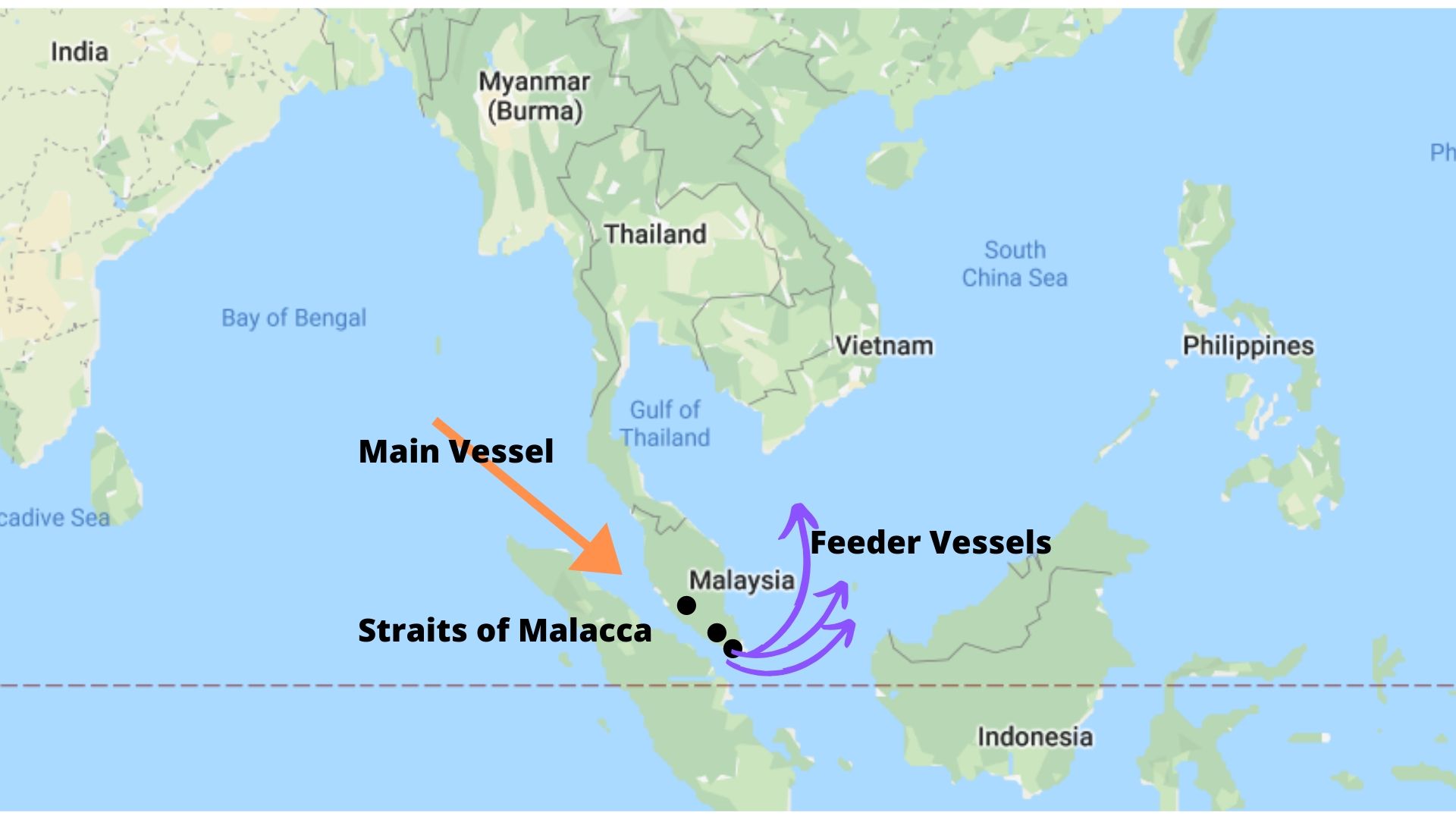 Trans as a prefix according to Merriam Webster is to “transfer”, so “Transshipment” refers to the transference of goods or containers from one to another.

The Business of transshipment

Transshipment is a major aspect of shipping that happens mostly without the involvement of the buyer or the seller of traded goods.

Despite that, the shipper or the consignee has the option to choose to tranship cargo via a named international port for various business purposes as well. But in broad terms, it is the Ocean Carriers that choose the route to tranship cargos.

For ports that are located strategically advantageous as a transshipment hub, the percentage of cargo container throughput is roughly 20% to 30% of the total container throughput. This stands as a significant portion of the profitability of the port’s operation.

On average, a container is handled 3.5 times between the first port of loading and the final port of discharge in 2008, which implies the significance of transshipment.

The major transshipment hubs of the world are ports such as Jebel Ali, Hong Kong, Busan, Singapore, Port Klang, and Tanjung Pelepas. These ports are strategically located at the junctions of major shipping lane routes.

There are 2 types of ocean network, the hub and spoke network and the relay network.

A hub-and-spoke network is a system where vessels berth at a primary port with high connectivity to auxiliary ports that surrounds that primary port.

Not all ports are built alike, and not all ports have the same kind of economic pull to interest the vessels from calling them. Consequentially, these auxiliary ports rely on feeder ports to transport the cargo.

An Ultra Large Container Ships (ULCS), capable of transporting over 14,000 TEUs, can call to the port of Singapore to unload containers destined for Singapore and Belawan. Subsequently, a smaller vessel will pick up the container staged there to Belawan with a connecting vessel.

The efficiency of hub-and-spoke is made possible with the practice of transshipment. It is also sometimes referred to as the “Triangle Shipment”.

Cargos that are planned for transshipment do not leave the intermediary port, which essentially means the cargo does not leave the principal customs area or Free zone.

What this implies is that a transshipment container bound to an intermediary port do not need to pay for duty and tax imposed by the country, because the goods are not intended to be used in that country.

Ship connectivity, port facility, and efficiency are some of the key factors that sway an ocean carrier from choosing one port or another as a transshipment hub.

Singapore, despite the fact that it is 100 times smaller than Georgia, EU, boasts a cargo throughput of roughly 37 million TEUs per year. Most of it is transshipment cargos.

Singapore also leads the way as having the highest bunker fuel sales volume. This indicates that Singapore has been the de-facto transshipment hub for feeder ports along the Bengal area and South East Asia.

The unique geographical location of Singapore also is a significant advantage. Singapore is the gate of the Malacca Straits. A stretch of sea wedged between West Malaysia and Sumatra, Indonesia.

Moreover, Singapore is shielded from extreme weather, as Indonesia’s surrounding islands act as a natural barrier for the rough seas. Singapore is also safely situated away from the Earth’s “Ring of Fire”.

All of this combined, with the low delay time that port of Singapore provides, seems like a dream for vessel operators.

There are certain intricacies of transshipment hubs that require special attention. The world is ever more connected and more ports and built to stimulate local economies and deliver profitability to stakeholders.

The shipper or consignee has to understand the transshipment hub’s permit requirements specific to the traded goods.

For example, floras and faunas that are endangered numbers in the billions of USD Dollar value are traded yearly. As a means to hinder the demand of these endangered species from proliferating, the Convention on International Trade in Endangered Species of Wild Flora and Fauna is born (CITES).

The goods traded in question are examples of rare species hide, husks and tusks of endangered species, endangered timbers and even live animals.

CITES is one of the world’s most widely adopted convention with 183 participating nations.

CITES resolves that even if the cargo is a transshipment cargo, it must be accompanied by a valid CITES import permit or certification and are subjected to the inspection of customs.

This is why logistic stakeholders or operators either stay away from dangerous goods or minimize their risks when handling it. Dangerous Goods requires expert handlers that are equipped with knowledge of the goods in transit and also the means to deal with events unforeseen.

Certain classifications of dangerous goods are outright restricted from the entry of a transshipment hub, other goods where the transshipment is permitted, require special permit requests.

Hence when transporting dangerous goods, vessel operators usually charge a premium on the ocean freight in order to cover the cost of port operations.

Transloading, or easily put, “Transfer-Loading”, is where cargos in the unit load device or containers are transferred from to another load device.

Converse to transshipments, transloading is where the cargos in the unit load are directly handled with, whereas in transshipments cargo handlers do not touch the cargo in the containers.

The Business of Transloading

All cargos undergo are transhipped or transloaded one way or another. Apart from land transportation, there is no other mode of transportation that is able to cover the whole journey.

However, the fact that the earth is 70% covered by water also means that land transportation has limited reach.

Because of that, transloading is part and parcel of supply chain management. Do refer to this post to understand more about global logistics.

Cargo Consolidation is the key, which promotes economies of scale. With the advent of transloading, a shipper can consolidate its shipment to be delivered to a transport hub, and de-consolidated to be distributed to multiple locations.

It is a cost-saving element that also ultimately reduces the handling cost of sending several separate shipments to separate destinations.

Transloading can be arranged to also fulfill the requirements of certain shippers/consignees or countries. A simple example is that certain companies require all pharmaceutical products to be shipped via plastic pallets instead of wooden pallets.

The handling cost of switching from wooden pallets to plastic pallets may be higher in the port of origin.

There are many other instances, such as product labeling, product repackaging, assembly, disassembly, break-bulking, etc… all of which can be performed according to the arrangements of the contracting party.

Transloading is not restricted to only sea transportation, it also can be performed multiple times via air, land, and rail. It depends on the requirement of the transport.

With the increasing complexity of transport, transloading provides an added option to the shipper/consignee by outsourcing part of the supply chain to service providers more apt in performing the task.