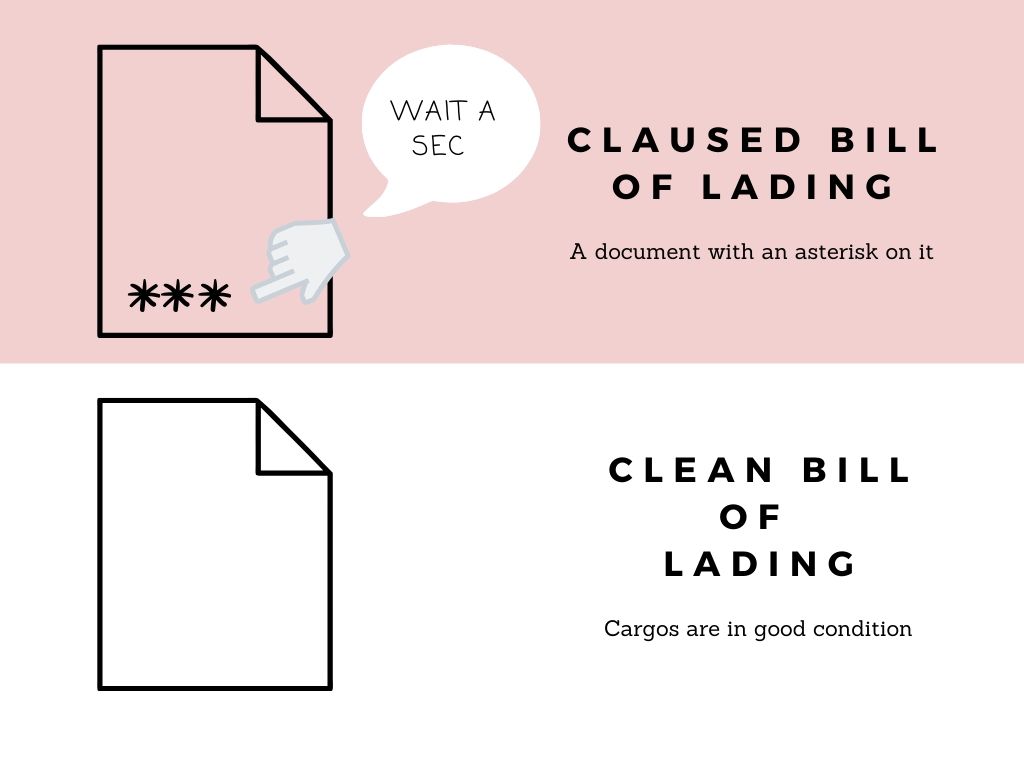 The polar opposite of a Claused Bill of Lading is a “Clean Bill of Lading”, whereby the transporter receiving the good and does not have any reason to suspect the goods are not in good condition and in order.

A “Clean” or “Dirty” bill of lading does not reflect on the bill’s hygienic condition. I’m just making sure no one did the same mistake as I did.

UCP 600, the Uniform Customs and Practice for Documentary Credit sets the standard for drafting and issuing letters of credit, has defined a clean Bill of Lading as “one which bears no clause or notation which expressly declares a defective condition of the goods and/or the packaging”

Ok, enough with the technical jargon, let’s get down to layman terms.

The carrier that issues a “Clean Bill of Lading” essentially trusts the seller for loading goods in an apparent good condition and nothing fishy is going on for the carrier to question that. Yes, the industry relies heavily on trust, almost too heavily.

It is also important for sellers to have a clean bill of lading. When the cargo is arranged with the guarantee of a bank payment to a seller, which was pre-arranged with a form of “letter of credit”. Of course, the banks would want to limit its liability by demanding a clean bill of lading as a stringent rule before paying the seller’s bank, and lastly the seller themselves.

Here is where the carrier/seller relationship goes to the test, diligent carriers may inspect the cargo and find that the cargo is not up to specs, or not up to the description the seller promised.

Therefore, the carrier adds a remark on the Bill of Lading, a small not-my-fault asterisk so the carrier protects themselves from claims from the buyer. At least the carrier won’t be maligned for mishandling the cargo during the delivery phase.

The additional terms used as a “disclaimer” in a Claused bill of lading, in the eyes of the carrier, needs to be broad enough to cover grounds, but not too broad as to seem like nothing is of their mistake. They need to be crafty with words.

If the carrier wants to be specific, they could add the clause “cargo wet”, “cargo rotting”, “some damaged packages”.

If the carrier decides to be broad, they would use “condition unknown”, “quality unknown”.

So long as the booking party and the carrier agree on the Claused Bill of Lading, this is an acceptable practice.

Why Sellers may Insist on not accepting Claused Bill of Lading?

The primary reason for not accepting the Claused Bill of Lading is financing, once a bank gets involved in financing the purchase, the shipping documents have to be prepared up to the requirements of the bank.

The Underwriting bank, or the bank that pays for the consignment, accepts shipping documents as the only proof of transaction and authenticity.

* We emphasize that this example serves only as an example, there are measures today that are in place strictly to detect fraud. Do not imitate the examples given.

Picture a scenario where the Seller and Buyer have colluded for a one-time scam, the seller and buyer agree on a transaction of 1 x 20’ container worth of car parts, valued at USD 1,000,000 per container.

Since the carrier accepts that cargo is in “apparent good condition”. They did not inspect the cargo and issued a clean Bill of Lading to the seller, and arranged the shipment financing with a Letter of Credit.

In this instance, there is no other way a Bank can prove the cargo shipped are car parts or just scrap metal, they can only rely on the due diligence on: –

How does the bank know that the elements above are met? By the documents of proof of the details above.

Suppose the seller and buyer had colluded and the cargo is in fact rubbish instead of car parts, and all the document trail did not show signs of fraud. The bank will stand to lose USD 1,000,000 due to fraud.

So, in broad terms, if the seller conspires to ship cargo that is not the same as described, not only the customs officer but also the cargo carrier is responsible to inspect the cargo before loading. And Letter of Credits almost exclusively requests for Clean Bill of Lading as documentary proof of cargo transaction.

Since the cargo shipped is in “apparent good condition” why even issue a dirty bill of lading?

This is a question I asked myself frequently. Since the cargo carrier can only do so much to ensure cargo is in apparently good condition, why bother issuing another clause stating “Cargo wet” or “some cargo damaged”?

After all, “Apparent good condition” is also a disclaimer, with other terms on the bill of lading like “said to contain” that excludes carrier from full responsibility of the condition of the cargo.

It makes better sense if we shift perspective to a carrier’s view, let’s outline the fact first that cargo damages can occur: –

Hence, it is a better practice for the carrier to attempt to capture on paper the best description of the goods for the sake of their own and the buyer.

If the carrier has done so, they have provided themselves more supporting evidence that the cargo damage is not done under their possession.