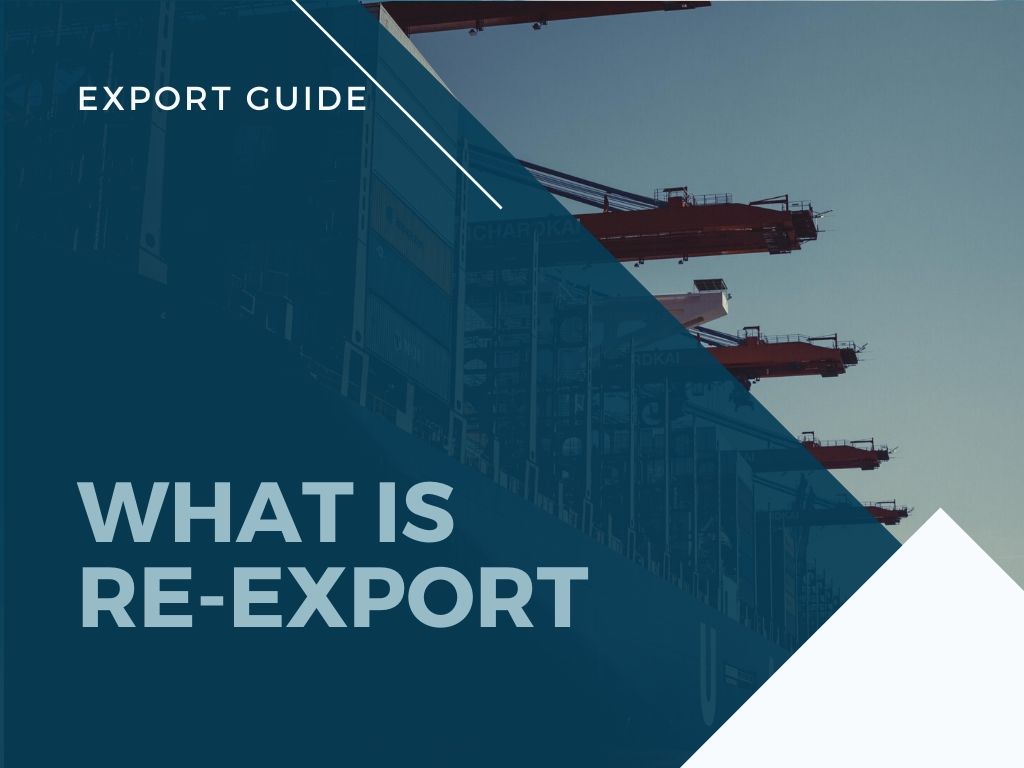 A significant portion of the containers in the port yard is actually not for the local market. It is intended for another destination. They are reexported to other countries of destination, not leaving the port, which is a principal customs control area. However, we must not make the mistake of categorizing a re exported container as a transshipment cargo, as they have different implication. So, what is reexport and when is it applicable?

Reexport is an operation where the goods imported do not circulate in the domestic market. It arises either from scenarios where the imported goods do not meet the customs or the importer’s requirement or from a shipment cargo that is subject to the Export Administration Regulation (EAR). Where classified cargoes in the field of technology are regulated. There are certain cargo containers that are imported but were not intended for local consumption or use, those cargoes are also allowed to be reexported with the approval of local customs regulation.

You probably can decipher what reexportation means, by just understanding the implication of the “re” preposition tagged with the “export” noun. But, the application and conditions where reexportation is allowed warrants further elaboration. Which is what we intend to do in this blog post.

Scenario Where Re Export is Applicable

Cargoes That Do Not Meet Customs Clearance Requirements

Customs Officer are the governments enacted filter to ward off cargos that do not meet health, safety and quality requirements. Depending on each cargo requirement, different government agencies may have a say on whether a cargo is allowed into the country.

One stark example is the importation of contraband such as guns and drugs, without the scrutiny of the US Customs, the country will run amok with deaths and crimes. The US Customs are the first line of defence.

But the US Customs are just one of many government agencies tasks to ensure health and safety. The US Food and Drug Administration (FDA) is one such administration. They regulate the import of Animal feed, tobacco products, cosmetics, household wares, vaccines, foods, and drugs among other items.

If an importer presiding in the USA imported a container load of cosmetics for example, and it did not pass the scrutiny of the FDA’s inspection, the cargo will not be allowed into the country. It will remain in the port yard until further processes are made, or in most cases, “reexport” the unqualified goods back to the country of origin.

Cargoes That Are Imported on a Short-term Basis Only

The term reexport is loosely used to describe cargos imported in this scenario. It is more aptly described as a “temporary import”. Nevertheless, the cargos under the temporary import status still require the process of “re-export” to another country destination, and this warrants this inclusion.

“not imported for sale or sale on approval, without payment of duty with the intent to export or destroy the goods within a certain period of time not to exceed three years from the date of importation.”

To unbundle that sentence, cargos are allowed for temporary import have these characteristics: –

The Customs Border Patrol will require a monetary bond that will be returned to the importer once the cargo has completed the re exportation procedure.

Here are a few examples off the bat that can apply for a TIB (Temporary Import Under Bond): –

Of course, the biggest advantage for the application of TIB is that importers are free from import duty and tax that is otherwise required for every imported good.

Cargoes That are Subject to Export Administration Regulation (EAR)

The US Bureau of Industry and Security (BIS) regulates the export of sensitive goods and dual-use technologies by enforcing export control, anti-boycott, and public safety laws.

Hence, sensitive goods that fall under the Commerce Control List, ascertained by the Export Control Classification Number (ECCN), will require an export permit and approval from the US BIS.

Naturally, the high degree of sensitivity of the cargos are relatively stricter in its regulation of cargo flow. The government will want to know what the status of the cargo is, even when the cargo is not intended for the use of the imported country.

We try not to delve too deep into politics, but the general idea is that, the US BIS does not want its controlled technology that is capable of endangering national security to fall to states that the government deems as dangerous.

Traders and manufacturers may unwittingly export sensitive goods to unintended importers by cargo re-exportation. Hence, the US BIS regulates this loophole, by requiring export permits applied on the re-exported goods as well, even though the cargo is remanufactured, or refinished.

What is Same State Re Export?

One of the conditions for a cargo allowed entry into the country, then subsequently allowed to be re-exported to another country, is that the cargo in question has to be in the same state.

Not to be confused that the cargo has to be in the same zip code in order to be qualified for re-exportation, the “same state” definition actually refers to the condition of the cargo when it is imported.

Once the cargo is imported, it effectively left the free circulation area that is under the customs’ control.

What the importer does to the goods that is temporary imported must be alter the condition or state of the cargo.

For example, a consignee imported unassembled phone equipment for the applied purpose of exhibition in a trade show.

However, when the consignee re exports the phone equipment, it is found that the equipment is assembled and additional manufacturing process has been added onto the equipment.

In the perspective of the customs officer, there is no way of differentiating whether the consignee has employed local labour to process the equipment for sale, or the assembly is part of the exhibition.

Hence, the cargo runs the risks of being rejected the status of “temporary import”.

It is important that the cargo that is temporary imported is re-exported with the same state or the same condition as when it is imported.

Is Transshipment and Reexport the Same?

Transshipment cargos occurs when ocean carrier vessels berth at a primary port with high connectivity. Only to be trasshipped to an auxiliary port that is the actual destination of import.

In some instance, the cargo container may be unloaded in the primary port, for it to be loaded onto a feeder vessel for its final leg of voyage.

This is not considered as a re-export cargo.

One way to determine if a cargo is bound for re-export or transshipment is to look at the underlying shipping document.

Transshipment cargo is arranged under one Bill of Lading. Whereas a Re-export cargo has 2 Bill of Ladings arranged. One for Import, one for the subsequent export.