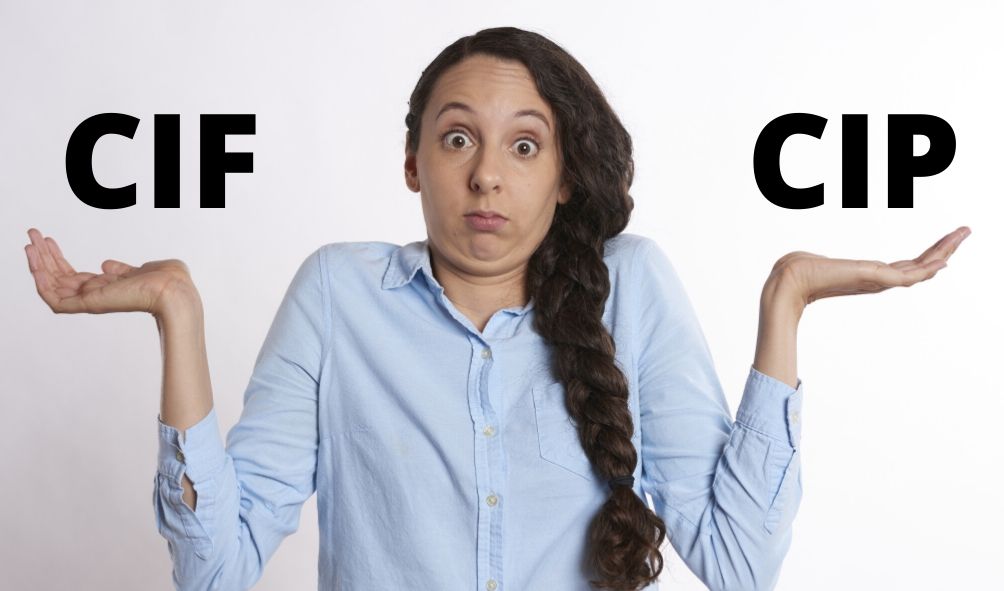 The subtle differences between INCOTERM CIF and CIP seem minuscule at first until you closely inspect and compare the two in several aspects. After rigorous mouse clicks and research about both the INCOTERM Rules, we surmise that the two look rather different.

Before that, we have to point out that the best description of all 12 INCOTERMs can only be accurately described by the people responsible in drafting the Rules, the International Chambers of Commerce (ICC) came up with the INCOTERM in order to eliminate any ambiguity in trading between the buyer and the seller.

This is the easy part; CIF 2020 is classified for sea transportation only.

Whereas CIP 2020 is used for all modes of transportation, whether it is the sea, air, railway, or road.

With CIF 2020, the seller takes the responsibility for transporting the cargo from the seller’s factory to the seaport of discharge.

Once the cargo is staged at the port’s container yard, effectively the responsibility of transporting the cargo from the destination’s port yard to the final destination lies on the buyer.

With the CIP 2020, the seller takes the responsibility for transporting the cargo to a named destination of the buyer’s choice. Since CIP includes all modes of transportation, it could be an airport terminal, a railway terminal, a container depot yard, or a warehouse of the transporter’s choice.

Insurance Coverage of CIP and CIF

Both CIF and CIP INCOTERMS requires the seller to purchase the insurance on behalf of the buyer.

It is clearer with CIF, as the seller agrees to purchase marine insurance to cover the journey up to the seaport of destination.

On the other hand, although CIP generally sets upfront that the seller is required to purchase insurance, there are no hard rules on how much coverage minimum is required.

This is important as the risk of ownership of the goods transported is different between CIF and CIP, which we will explore further below.

Class A is the most extensive coverage therefore the most expensive whereas Class C is less extensive and demands lower insurance premiums.

A seller can get a Class (C) coverage and still fulfill the requirements set in the INCOTERM Rule unless the buyer explicitly requires other forms of insurance coverage.

We covered the benefits of marine cargo insurance at length in this post, have a look at it if you need a clearer picture.

Transfer of Risk of CIP and CIF

Transfer of ownership is where the possession of goods is transferred from one party to another, usually a documentary transfer with a Bill of Lading Form.

On the other hand, the Transfer of transport responsibility is where the responsibility of moving the cargo has been transferred from one party to another.

the Transfer of Risk is where the risk of moving cargoes is transferred from one party to another, as dictated by the INCOTERM rule arranged.

The key distinction between CIF and CIP is that although in a CIP term the seller arranges the carriage of goods to a named destination, plus insurance, the seller’s risk of transportation is transferred to the carrier once the first carrier has picked up the cargo.

To reiterate, yes the seller pays for the transportation, but at the risk of the buyer.

Case Example for Transfer of Risk

For example, in a Free on Board or (FOB) shipment, the seller is responsible for transferring the cargo to the port, clearing customs for export and stage the container onto the booked vessel.

Once the container is “shipped on board”, detailed in the Bill of Lading, the seller then arranges the Original Bill of Lading to be couriered to the buyer once he receives the payment.

In this scenario, the shipment term is FOB, the buyer arranges the freight booking with their own contracted agent.

If there is cargo damage on board of the vessel, and the damage is proved to be damaged by the carrier, the buyer cannot argue that he/she hasn’t had ownership of the goods yet if the Bill of Lading hasn’t reached him. He can only lay the damage claim to the ocean carrier he was responsible to arrange.

One thought on “What’s the Difference between CIF and CIP?”

link to How to Export Beef to Malaysia

Beef consumption in Malaysia is about 6 kilograms per person per year. With a population of 32 million people, that amounts to a staggering 192,000 tonnes of beef consumed in a year. Since Malaysia...

Timber and timber products can be classified as traded commodities, this is why the Malaysia timber export or import requirements are highly regulated by local state authority. In Malaysia, The...