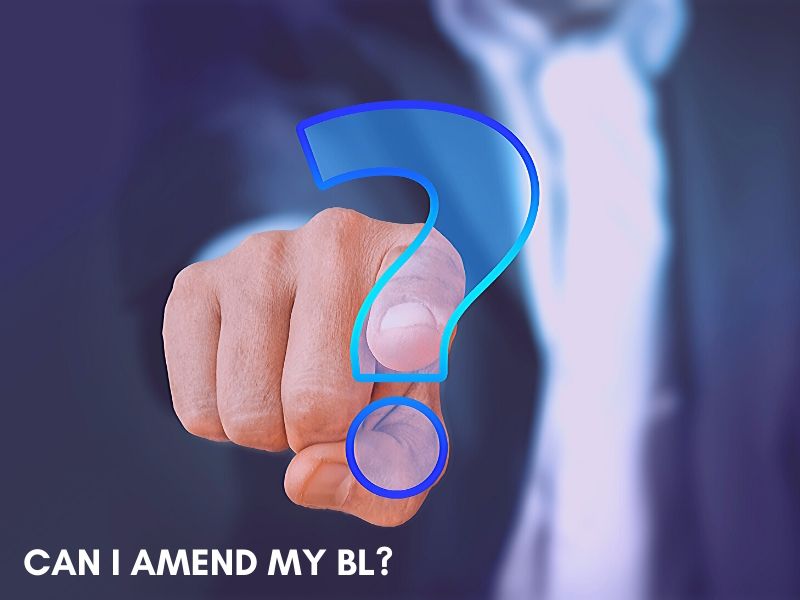 Once a booking confirmation for export has been set, shipping agents, forwarders and NVOCCs will prepare the bill of lading according to the details of the booking confirmation. But throughout the logistics processes, we must expect changes in shipment details or cargo details. So, can a Bill of Lading be amended accordingly? Yes, but nothing is set in stone.

Amending the Bill of Lading

A shipping manifest is a document detailing all cargos carried onboard the vessel for customs, port operators and government permit issuing agencies to refer. They are prepared based on the bill of lading details compiled.

After the booking confirmations have been complete, it is common practice for the shipping agents to prepare a draft bill of lading for the shipper/exporter’s final confirmation. This is an important process, particularly when the trade is financed by a bank via a letter of credit.

If the exporter has not expressly confirmed the draft bill of lading, the shipping agents will not submit it for manifest preparation, the exporter can amend the bill of lading as often as they wish to, prior to the vessel’s departure cut off date of course.

From an importer’s point of view, apart from a few caveats which we will discuss below, there is no obvious reason for the importer to amend the bill of lading. Furthermore, once the shipping manifest has been submitted to port operators and customs officers, amending the bill of lading will mean that the manifest and bill of lading details will differ. Consequentially, this may violate customs regulations and depend on the country, there will be a customs penalty for this misrepresentation.

To further elaborate, we mentioned that once the bill of lading has been confirmed, it is subject to the approval of the destination’s shipping agent on whether they can process the amendments.

This is because in certain countries, in order to adhere to CT-PAT rules (Customs-Trade Partnership Against Terrorism), they require the manifest to be submitted 24 hours in advance prior to shipment arrival. This requires timely preparation of the shipping manifest important for a smooth vessel berthing operation.

Some of the countries that require Advanced Manifest Submission are: –

We have mentioned what is advanced manifest submission in this blogpost here so we will not detail it further.

Of the 6 Countries above, The United States, China, Japan and Europe rank as the largest economies of the world by GDP. Hence, the majority of the cargo shipment will have either a loading point or destination point in those countries.

Therefore, we have to be very mindful if we were to export products to those listed countries, as amending the bill of lading once the manifest has been submitted and approved requires more steps.

Subsequently, the shipping agent will proceed with the amendment accordingly. Certainly, at the late stage, there will be a manifest correction fee.

The cost of manifest correction usually hovers around 40 USD, some shipping agents may charge higher than that.

In short, the bill of lading details will portray into the shipping manifest, and amending the manifest is possible, whether it is an AMS submission or standard manifest submission. of course, there will be a nominal correction fee stipulated.

Situation Where Amending the Bill of Lading is More Tricky

We undergo Customs Declaration or Clearance after the following has been marked done: –

Once the Bill of lading show any omission, error or mistakes when compared to other documents such as permits, manifests, or invoice. It comes to the customs officers to inquire, inspect or do anything necessary to assess the shipment.

If the details between bill of lading and other documents differ drastically, the importer cannot amend the bill of lading for customs clearance purpose. This is where the shipment is marked for inspection and inquiry, and depending on the importing country. There will be monetary penalties involved.

In situations where the details of the bill of lading differ, such as the cargo weight, the container number, shipper/consignee spelling errors, we can escape with a claused bill of lading amendment.

This is all fine when a letter of credit is not involved.

The key takeaway from this blog post is that a bill of lading can be amended, but be very mindful when there are important supporting documents involved, such as the letter of credit and the certificate of origin.

What If my Bill of Lading is Original?

If a shipment is arranged with an Original Bill of Lading, traditionally there will be 3 original copies issued by the Shipping Agent.

One thought on “Can a Bill of Lading be Amended?”