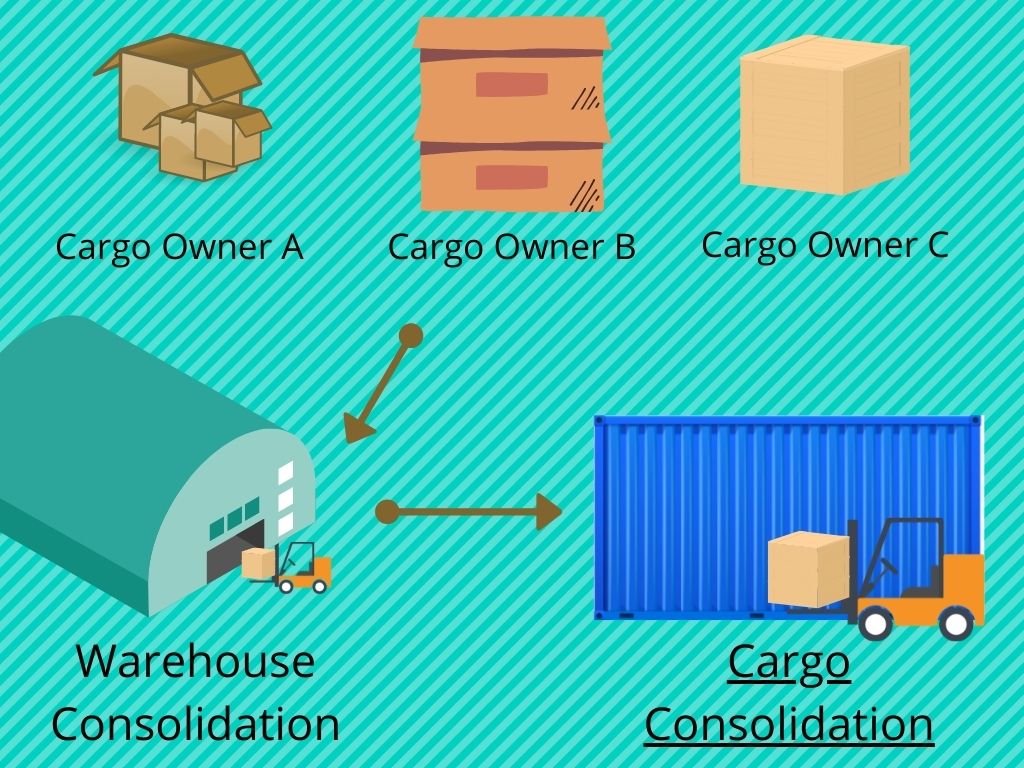 The concept behind cargo consolidation or freight consolidation is to spread the cost of logistics from one person to multiple cargo owners. A typical cargo owner that would consider utilizing cargo consolidators’ services is those that want to transport cargo that is not too large that it makes sense to use a single container/truck, or not too small to utilize a parcel delivery service provider. These in-between sizes’ cargo is known as LCL (Lesser Container Load) or LTL (Lesser Truck Load). Cargo consolidation makes economic sense but only to a certain cargo volume and size. Normally, cargo consolidators are not shipping liners or airliners. It is the third-party logistics providers (3PL) that largely provide such services.

Similar to shipping containers that we are accustomed to seeing on the road or shipping vessels, aircraft carriers also require containers to hasten the cargo loading and unloading processes.

Every second the aircraft spends on the ground is considered a cost to the carriers. Ground staff has to perform loading/unloading, refueling, flight inspections, and restaffing in synchronicity.

The two forms of air freight containers are;

Unit Load Devices are lightweight aluminum containers that are purpose and form built to suit the aircraft’s undercarriage.

However, not all shipments require a full ULD or cargo pallet.

Air Freight service provider freight charges are based on the chargeable weight. Chargeable weight is the higher number between the cargo’s gross weight and its volumetric weight.

In essence, when arranging an air freight shipment, the service providers will automatically consolidate your cargo accordingly.

Of course, there are certain limitations when it comes to air freight shipments, the size and weight of the cargo are limited to the capacity of the aircraft in use.

There are many permutations of sizes of ULDs, which is outside the scope of this article. Cargo consolidation in air freight transportation is a common occurrence.

An air cargo terminal is responsible for receiving cargo goods and parcels. The terminal operators then load them onto cargo pallets or ULDs and stow them onto the aircraft.

Loosely speaking, unless the cargo shipped by air is larger than the size of a ULD, such as a vehicle, any cargo shipped via air freight can be considered as a consolidated shipment.

A cargo owner does not need to have 20 tons or so worth of cargo to fully benefit from the cost savings from a sea freight arrangement. Soon after the advent of sea freight containerization, cargo consolidation services followed closely that.

The concept is effective and simple, cargo consolidators collect cargo from cargo owners into a designated warehouse.

The consolidators then establish a contract of affreightment with the shipping lines or NVOCCs (non-vehicle operated common carriers).

Subsequently, the cargo consolidators will instruct the warehouse operators to load the cargo into shipping containers assigned by the shipping lines.

Note that cargo consolidators can choose a plethora of warehouse operators with different expertise to consolidate and load cargoes into a container.

For other general cargoes, most cargo consolidators engage with seaport terminal warehouses. What is meant by general cargoes are non-hazardous cargoes, and do not require any other specific transport requirement.

Cargo Consolidation and Bill of Lading

What is the relationship between cargo consolidation and bill of lading?

To answer that question, we need to understand who are the purveyors of cargo consolidation.

Cargo consolidation is performed mostly by third-party logistics providers (3PL). Most businesses outsource their logistics and supply chain operation to 3PL providers. The reason why businesses do so is that it is more cost-effective. Unless the cargo owners can justify owning their own ships, trucks, aircraft carriers, and warehouse.

Resource allocation is key. Although a 3PL provider may not physically own the ships, trucks, aircraft carriers, and warehouse, a 3PL providers’ core advantage is that it can connect and stitch different service providers together to offer an all-in solution to the cargo owners.

As we mentioned that cargo consolidators are mostly third-party logistics providers, or 3PL providers, a cargo owner is establishing a contract of affreightment with the 3PL provider, and not directly with the shipowner, or the airline company.

Hence, if you require cargo consolidation service, you have to be content with receiving a house bill of lading, or a house airwaybill.

On the flip side, if you engage with a 3PL that is suboptimal, or lack the resources to honor a bill of lading, you are taking in transportation risks that are not properly negated.

We are only going to describe the advantages of cargo consolidation from the perspective of the cargo owners only, instead of the supply chain as a whole.

Yes, there are benefits such as lower carbon emission and the like. However, our opinion is that this information does not sway cargo owners’ decision to use a cargo consolidator.

Technically, it is not a matter of choice between using a cargo consolidator or not, it is a matter of necessity.

Honestly, what other options does a cargo owner have? Apart from having an FCL shipment arranged, LCL shipment is the only option for cargo owners.

When the cargo is relatively small in size, a cargo owner has a choice between arranging air freight or sea freight. In either case, both freight arrangements are performed by consolidating the cargo.

Instead of discussing the disadvantages of cargo consolidation, we believe the more important question is the inherent risk from engaging a freight forwarder to do the consolidation for you.

Firstly, we need to look at the contract of affreightment that will be established if you choose to consolidate your cargo. We talked about this but it warrants a repeat.

When this happens, the cargo owners are contracting with a “cargo consolidator” or a freight forwarder. This binding contract is the house bill of lading, which we’ve discussed above.

We also discussed at length about what a House Bill of Lading is, as opposed to a Master Bill of Lading, you can find that article here.

It is an important distinction, as you are exposing yourself to risk that the third-party logistician may not have the ability, or strength to uphold the terms of the contract (Bill of Lading).

There could be various reasons why third-party logistics may default on its contract of affreightment.

It could be in terms of financial strength, the ability to reimburse any losses or damages to the cargo owner.

It could also be in terms of a lack of technical skills. Third-party logisticians may not have sufficient skillset to load and lash the cargo safely. This may result in unwanted damages to the goods transported.

The key tenet that we like to emphasize is that, there is no substitute for cargo consolidation if: –

However, there are exceptions where regardless of the quantity or size of your cargo, using a cargo consolidation service is out of the question: –