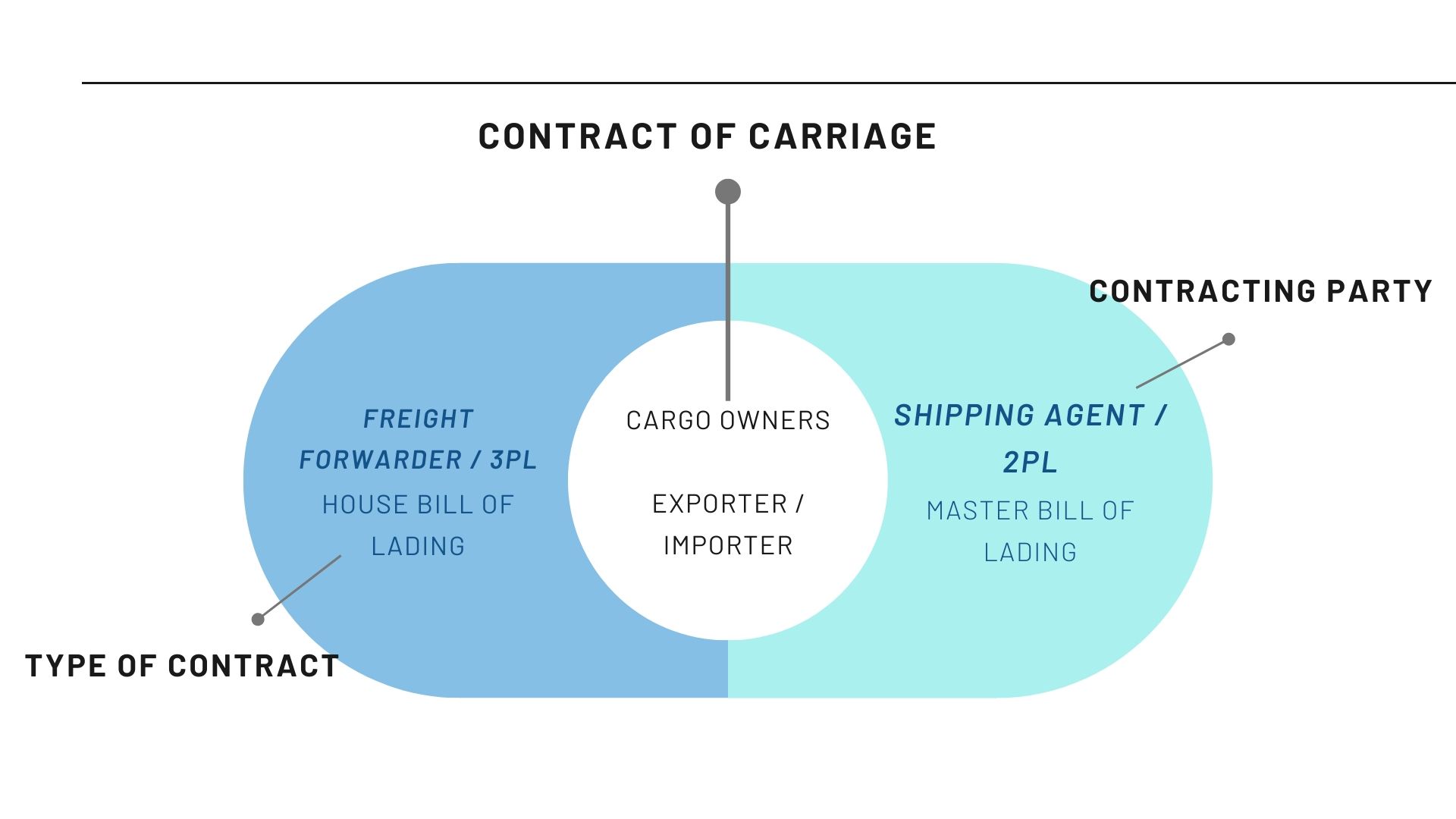 While scouring through the internet, we have realized there are still some confusion, in the perspective of the exporters and importers, as to what are the implications of accepting a house bill of lading or a master bill of lading. Particularly for new international traders, this aspect may seem intimidating. But let’s try to declutter all the complexity, and offer some guidance and good practices in order to avoid the pitfalls of accepting the wrong type of Bill of Lading for your particular business operation.

It is of paramount importance in your business in deciding which type of Bill of Lading to accept. So, let us get straight to understanding what is a house bill of lading and when to use it.

In order to understand the difference between the two, we need to only understand one important fact: Who is your appointed logistics service provider:

This fact will be constantly revisited, so it is important for you to keep this in mind.

In terms of the difference in engaging a freight forwarder/NVOCC or a shipping liner/agent. It is down to the question of how involved you want to be in your logistics operation.

With a Freight Forwarder, third party logistics provider (3PL), or fourth party logistics provider (4PL), your company has effectively consigned most aspects of the supply chain operation to a third party. These service providers have the capacity to handle transporting your cargo from door to door and are able to utilize a plethora of modes of transportation to offer a combined solution.

This sort of service is enticing for corporations, whether you are a sole proprietor working from the comfort of your home, or a large multinational company.

The benefit of being more involved in your supply chain operation will translate to a higher degree of control in your cost, organization, and assets involved.

Difference between HBL and MBL

From our experience, the crux of the issue for exporters and importers in shipping documentation is distinguishing the difference between a House Bill of Lading and a Master Bill of Lading.

To understand what sort of Bill of Lading you would be receiving as an importer or exporter; you have to first determine who are you contracting as you logistics service provider.

When you are engaging with a Freight Forwarder/NVOCC, 3PL or 4PL, your contract of carriage will be a House Bill of Lading

When you are engaging with a Shipping Liner/Agent, your contract of carriage will be a Master Bill of Lading.

We all know what are the functions of a Bill of Lading, we have covered that to some extent here:

Additional Reading: Terms and Conditions of a Bill of Lading

So, What is a House Bill of Lading?

In basic terms, a bill of lading is a contract of carriage between the consignor and the logistics service provider to transport goods to an agreed-upon destination.

As a document, a House Bill of Lading performs all the mentioned above, but it is issued by Freight Forwarders/NVOCC, 3PL, and 4PL.

Additional Reading: What is 3PL in Logistics?

What about a Master Bill of Lading?

A point that is worth reiterating is that the master bill of lading is a contract of affreightment between you and the shipping agent or any other primary transporter.

Putting It All Together

Now, let’s not get too bogged down with all the variations of bills of lading yet. We only know these four facts of a House Bill of Lading: –

Furthermore, one broad stroke fact that we should consider is that Freight Forwarders and NVOCCs do not own ship vessels, airplanes, trucks or rail infrastructures. So, how could they even issue a House Bill of Lading whereby they couldn’t perform any transportation themselves?

Figuratively speaking, Freight forwarders, NVOCCs and 3PL are the “architects of transportation”. Freight Forwarders contract with 2PL (second party logistics) that offer vessels, airplanes, trucks or rail with a separate contract of carriage in order to transport their client’s goods.

Hence the notion, when you are issued with a House Bill of Lading, your direct contracting party is not with the shipping agents that represent Maersk, OOCL, CMA-CGM, but with the freight forwarders.

This implicates that for any failure to perform the contract of carriage for any given reason, your beef is with the Freight Forwarder, not with the Shipping Agents.

With a Master Bill of Lading there are many other ways it can be prepared here are some of the forms of bill of lading: –

These are forms of bill of lading that either facilitates trade finance or expedites cargo release procedures. So, let’s not overwhelm ourselves with those yet.

Particulars and Formats of HBL

Conventionally, the particulars furnished by Exporters and the Particulars of Freight Preparation mentioned above are immutable.

A freight forwarder cannot prepare a house bill of lading without the Master Bill of Lading details above.

Two points we need to recall: –

So, as an exporter or importer, know that for one shipment, there are 2 bills of lading issued but by different parties. You will only be holding ONE bill of lading at one time.

Formats of a House Bill of Lading

Perhaps the format in which the shipment particulars are displayed on is inconsequential, so long as the details are all displayed. But having said that, there seems to be a universal format of how a Bill of Lading displays information.

The reason for that is purely for the users to be able to read the documents relatively faster. Instead of searching high and low across the document for a small fine print of detail, the users can point out the details straight away by knowing roughly where the details are placed in the document.

Issuing a House Bill of Lading should then stay true to the formats of a Master Bill of Lading, not because it is mandated by rules and regulation, but for document uniformity.

Buried by the administration of documents, anyone can put on a façade as a Freight Forwarder and issue a House Bill of Lading, only to scam the exporter of its cargo at the Port of Destination.

This way of a scam is brutally easy to execute, here is how one can perform such a scam.

*Therefore, the contract of carriage is between shipping agent and Freight Forwarder A instead of you.

Sounds scary, but it happens really often. You are holding a House bill of lading, but you are contracting with a con.

Now there are steps where port authorities and shipping agents implements to prevent such calamity from happening, such as: –

But these measures are not nearly enough to deter such scams from happening, it is happening on a daily basis.

When to Issue House Bill of Lading?

With a House Bill of Lading issue, comes great responsibility.

As freight forwarders and NVOCCs, we have to be mindful of the risk to reward ratio of transporting goods internationally.

The average value of transportation costs consists of 2% to 4% of the total value of the goods transported, which also means that for a 2% to 4% revenue for the logistics service providers, we are exposing ourselves to 96% to 98% claim of the invoice amount.

Even though the contract of carriage has a monetary limit on liability claims on cargo loss or damages that is attributed to the freight forwarder, NVOCCs or it’s vendors, the issuers of the House Bill of Lading stake their business rapport on the line when issuing a HBL too.

Therefore, before issuing a house bill of lading, it is important to have the proper insurance to cover contingencies such as cargo loss and cargo damage, and third-party claims. It is advisable that both the service provider and the cargo owner has to have an adequate insurance claim.

When to Accept House Bill of Lading?

The contract of carriage is only as strong as the issuer of the contractor.

As the cargo owner, we need to ascertain that a House Bill of Lading is sufficient in place of a Master Bill of Lading. After all, one underlying fact rings true is that a Shipping Carrier is less likely to default on its obligation if compared to a freight forwarder or NVOCC.

Judging whether a House Bill of Lading therefore is boiled down to two factors: –

An Issuer of the House Bill of Lading has to be a dependable entity, they have to be financially stable and is relatively unlikely to default on payments to its vendor consigned to ship your cargo.

In addition, the issuer of the HBL’s trustworthiness has to extend to the vendors and its global network of logistics provider. We all know the saying; we are only as strong as our weakest link.

Its all up to the exporter/importer’s business acumen or experience in choosing the right service provider, it is a long-term relationship. So, choose wisely.

Another factor to consider is the trade financing requirements. No doubt that the practice of accepting a house bill of lading is normal, but when other parties are also stakeholders to the shipment, i.e. bank financing via a letter of credit, we have to adhere to the letter of credit’s strict requirements. Some may not accept a HBL as a document of title.