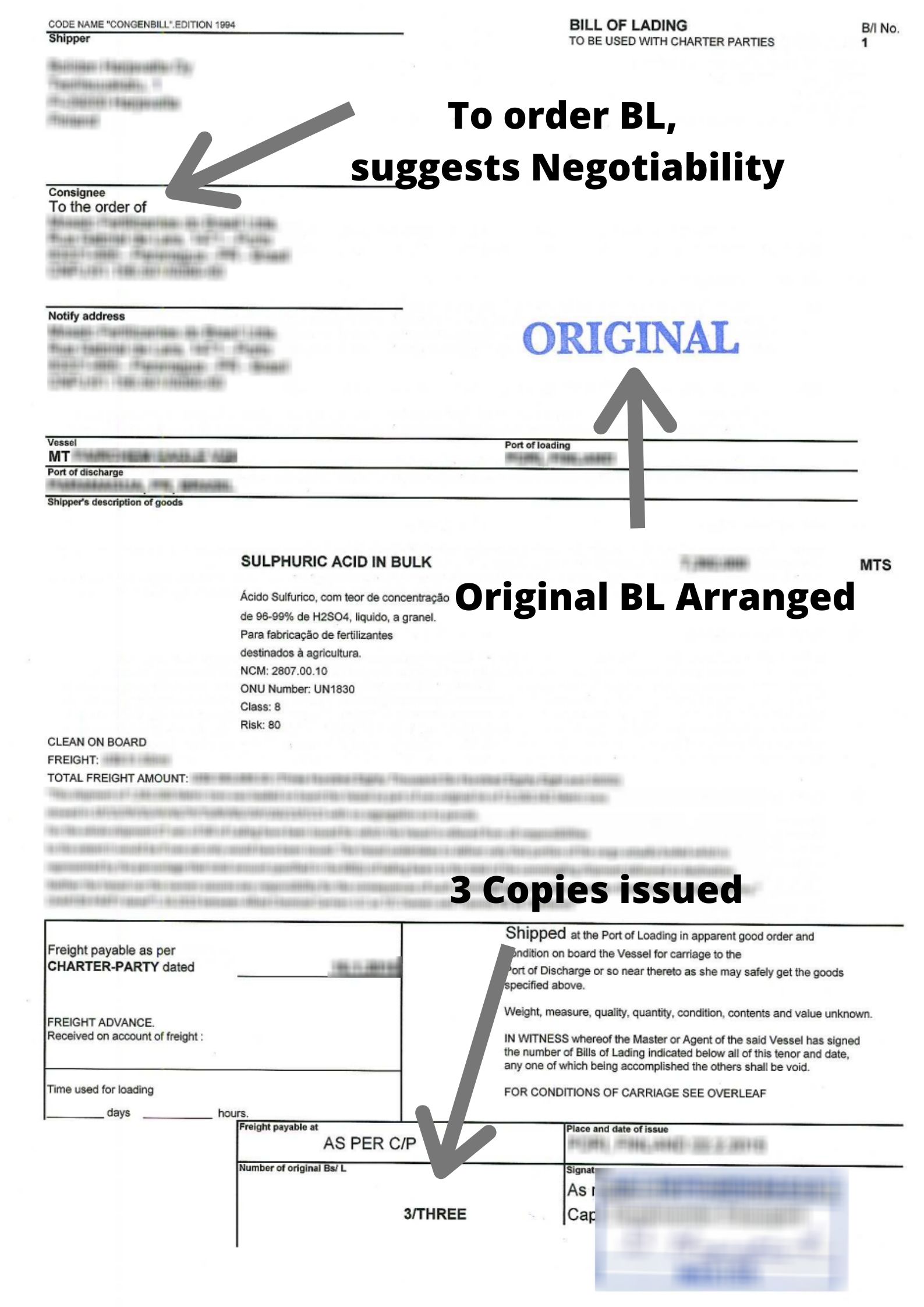 If things haven’t been complicated enough already, they had to have so many formats and types of Bill of Lading, haven’t we had enough???

The title of this post is “An Encompassing Guide”, we’re sorry for the clickbait. Here in this guide, we look to provide a wide breadth of information about “To Order Bill of Lading” instead of the depth of information. Because really, there are hundreds of pages about this and we cannot truly give this topic justice with just one post.

To make things easier, let’s play a game of word association before elaborating down the line.

To put it all together, a “To Order Bill of Lading” is a Document of Title used in logistics that is “Negotiable”, therefore the owner of the shipped cargo is “Transferrable”. It is prepared as an “Original Copy” that is often used with a “Letter of Credit” to facilitate a safe transfer of both the cargo and money between the buyer and the seller.

Now you are 70% of the way of understanding the “To Order Bill of Lading”. Give us another 7 minutes of your time to elaborate further below.

When we classify the Bill of Lading as “Negotiable” or “Non-Negotiable”, we meant specifically that the intended end customer is yet to be determined.

But you might wonder how does one arrange transportation when we do not know who is the intended receiving party?

In actual fact this is a common occurrence in logistics, high sea sales occur frequently. During the sea transit of cargo, the ownership may change hands multiple times. Hence the term “Negotiable”, as the ownership of the cargo is still negotiable even when the cargo is in transit.

On the flip side, a “Non-Negotiable” Bill of Lading is the direct opposite. It can come in the form of a “Straight Bill”, or “Telex Release Bill”. In the consignee column of the Bill of Lading, the named consignee is set in stone, there is no other party that can claim ownership of the goods.

Now let’s build on the understanding of the To Order Bill of Lading is negotiable and transferrable.

A negotiable bill of lading allows the banks to play a role in the trade, by stepping in as a custodian to the goods and undertaking the risk of financing the shipment.

The banks use a credit document called a Letter of Credit.

Say for example that Bank ABC is issuing a Letter of Credit as instructed by the applicant, or the consignee. The Order Bill of Lading will have the consignee column labeled as “To Order of Bank ABC”.

The Letter of Credit then sets clear instructions and documentary requirements for the Exporter to follow. Such as: –

Following the UCP 600 guidelines, once the requirements are satisfied, Bank ABC endorses the Order Bill of Lading and proceeds to make payment to the beneficiary bank that represents the seller.

Well, this is the general gist of the function of a Letter of Credit, by no means this is extensive.

Word of caution, although having the financing risk transferred to the bank has it’s benefits, it can be cumbersome to adhere to all of the conditions set by the Letter of Credit.

Because the bank relies solely on commercial and logistics documents to verify the shipment’s validity, it is no wonder that banks are as stringent as they are.

Here is an example list of a Letter of Credit conditions to be met.

Another instance where you can label the Bill of Ladings “To Order” is the bearer bill of ladings.

Bearer Bill of Ladings are quite rare, and frankly archaic. Bearer bill of ladings allows any person holding the bill of lading to take delivery of the cargo.

While a classic To Order Bill of Lading requires endorsement from the receiver of goods, the bearer bill does not require that.

To Order Bill of Lading requires Original Copy to work

In a Non-negotiable bill, the transaction is straight forward; One buyer, one seller.

Both the seller and buyer are named on the bill of lading.

As short sea shipping becomes a common occurrence, the traditional bill of lading arranged as Original has to arrive at the destination before the cargo does. If not, the cost of delay in detention and demurrage makes logistics inefficient.

So, we have Seaway Bills and Telex Release Bills to address that, where a copy of the BL is sufficient for the Carrier to accept to release the cargo. Of course, the identity of the consignee has to be proved in one way or another.

As we mentioned, high sea sales can occur multiple times during transit. It does not take much to have a small dispute in the transaction to have multiple buyers claiming ownership of the cargo since there can be multiple copies of the Bill of Lading floating around.

The controlling factor is if the Bill of Lading is strictly issued as an original copy, the holder of the endorsed Original Bill of Lading has the right to possess the cargo, as they presented the accurate document of title.

Now, what happens if the Original Bill of Lading is lost?

We addressed that in the post here. Do swing by to have a brief look at it.

One thought on “What is a To Order Bill of Lading? An Encompassing Guide.”