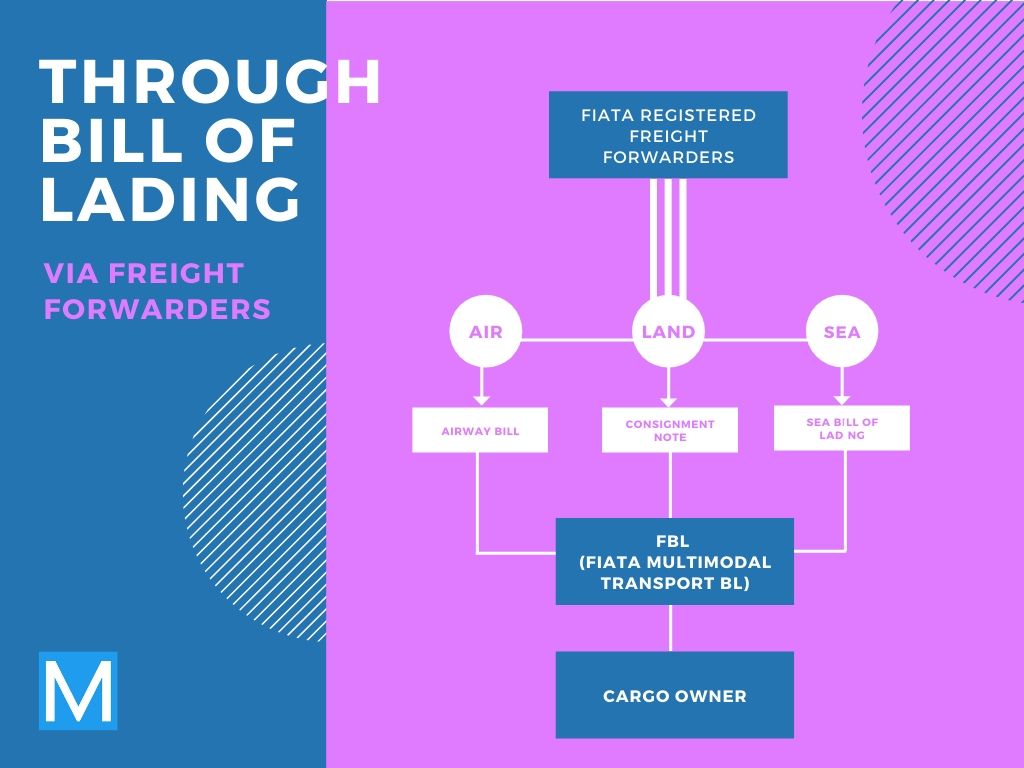 The concept of a Through Bill of Lading is relatively simple, it is a reference to the use of multimodal transportation, where one carrier provides the full-length services via more than one transportation mode. Subsequently, a through bill of lading is then issued by the main carrier that covers multiple modes of transportation.

We have to familiarize ourselves with the function of a Bill of Lading. It is a contract of carriage issued by the main carrier or third-party logistics providers (3PL) that serves as a document of title of the underlying cargo. It indicates that either the main carrier or the 3PL has possession of the goods in transit, and is responsible for the goods in transit until the intended consignee takes possession of the goods.

Additional Reading: Terms and Conditions of a Bill of Lading

As an example, TRACECA participating countries use a consignment note CIM/SMGS for its railway transportation documents.

Multimodal Transportation with Through Bill of Lading

For the shipper or the consignee, it may not be feasible to have 1 bill of lading per transportation, it poses significant administration works, and not to mention the liability of having multiple contracting parties.

In an event where the cargo is damaged or lost in transit, the cargo owner will have a difficult time investigating the root cause of the damage to raise a damage/loss claim, as there are multiple transportation parties involved.

The logical way of curbing all those cumbersome documentation works is to engage with a single logistics service provider. From our perspective, a through bill of lading and a multimodal bill of lading carries the same meaning, it is a reference to the same document.

There are 4 components of a multimodal transportation: –

Disadvantages of a Through Bill of Lading

On the flip side, organizing freight transportation across multiple modes of transportation, while at the same time accepting a single document of title indicates two possible scenarios: –

All things considered, multimodal transportation involves many parties singing the same tune together to make it work, and consequentially, the more parties are involved in a through bill of lading, the rarer it is to organize it under a single bill of lading.

Examples of a Through Bill of Lading

With the standards set by the FIATA (International Federation of Freight Forwarder Association), a multimodal bill of lading or a through bill of lading can be issued for the following transportation

Specifically speaking, FIATA has two documents that cater to the contract of carriage for multimodal transportation: –

FBL is akin to an original bill of lading, whereas an FWB is akin to a seaway bill. The difference is, however, is the issuing party of an FBL or an FWB is the freight forwarder.

Both scenarios require a lot of resources or political strength to facilitate transportation. The third option, or the easier option, is for a freight forwarder to be the main logistics service provider, hence the notion of a third-party logistics provider (3PL).

Engaging a 3PL allows a cargo owner to not worry about the ebbs of transportation, and transfer the risk and responsibilities to the 3PL provider.

The 3PL then engages multiple parties, i.e. the rail transporter, ocean carrier, land transporter and packages it nicely to an FBL and sells its service to the cargo owner.

The more common use of a Multimodal Transportation is for: –

As a cargo owner, an issue of a through bill of lading has to come from a reliable, if not a reputable freight forwarder or Vehicle Operated Common Carrier, the litmus test every cargo owner has to undergo is to ask themselves, whether the service provider is in a position of strength to provide such service and whether the service provider can fulfill dutifully its contract of carriage.

link to How to Export Beef to Malaysia

Beef consumption in Malaysia is about 6 kilograms per person per year. With a population of 32 million people, that amounts to a staggering 192,000 tonnes of beef consumed in a year. Since Malaysia...

Timber and timber products can be classified as traded commodities, this is why the Malaysia timber export or import requirements are highly regulated by local state authority. In Malaysia, The...