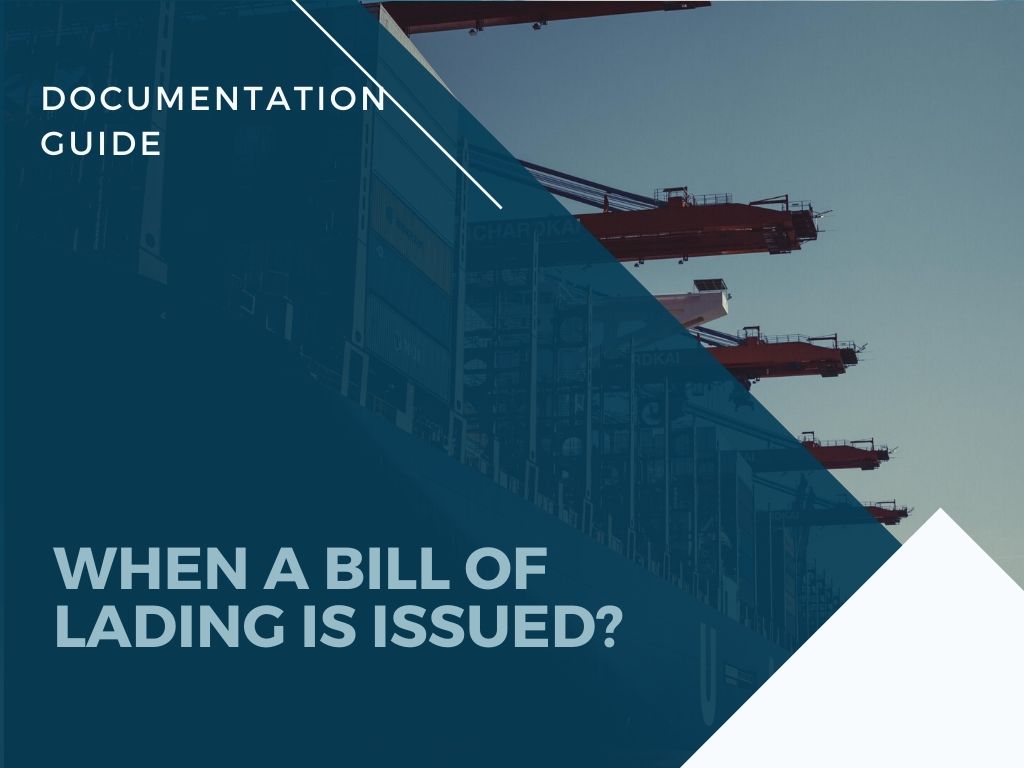 For exports, from the perspective of documentation flow. There are a few processes that need to take place before the issue of a bill of lading. First and foremost, all relevant information such as container number, cargo details, voyage details, and freight details has to be collected accurately. That information is compiled by the shipping agent or VOCC into a shipping manifest. Once the shipping manifest has been cleared by the customs officers, then a Master Bill of Lading is issued. Therefore, it is common that the laden cargo container has been collected by the truck operator and delivered to the port without a Bill of Lading.

Why is the Date of Issue Important?

If you are searching for an answer to this question, chances are you already know what a bill of lading represents in international sea transportation. So, there is no need for us to elaborate in detail what a Bill of Lading is.

Specifically speaking, any statutes of limitation on the contract is calculated based on the date of the bill of lading issued.

As an example, Bill of Ladings have to adhere to the following conventions: –

All of the rules above underlines a time bar to which the wronged party can issue a claim against the issuer of the bill of lading. Usually the time bar ranges from 1 to 2 years, but we need to be more careful with House Bill of Ladings, as they are not required to fully adhere to the conventions above.

Additional Reading: Terms and Conditions of the Bill of Lading

When is a Bill of Lading issued?

This question comes in 2 forms. One is when in the stage of export documentation that a bill of lading is issued; Another is the actual date of the issue of the bill of lading.

We have briefly summarized in the introduction, concerns about a bill of lading issue surface for cargo exportation only. Therefore, we will only look at the export document flow.

Here is a graphical depiction of a documentation flow. One caveat, however, is that every country would have different process documentations. But generally speaking, the process does not differ much from country to country.

The tricky part is that the information necessary to prepare a bill of lading comes from different sources.

Cargo information such as net weight, cargo description, and packing information comes from the cargo owners, who issue the commercial invoice and packing list to provide that information. The sooner the documents are presented to the shipping agent, the faster the bill of lading can be prepared.

In some countries, the container depot operator has the authority to pick the container for an exporter to use. This is arranged so as to reduce the handling costs of staging containers for trucks to haul.

Besides, shipping agents have to prepare a shipping manifest summarizing all the cargo on board for the approval of local customs officers.

Once all the above processes are performed, and the cargo owner or logistics service provider has cleared all port fees and freight charges payable to the shipping agents, the bill of lading will be issued only then.

It is a common misconception that the bill of lading will be issued once the cargo is “received for shipment”, or the cargo has been “shipped on board”.

But, if we are talking about the issue of the physical bill of lading, it occurs after the vessel has departed.

Recorded Date of on Bill of Lading

As we discussed, the recorded date of the issue of the Bill of Lading is entirely separate from the actual date the physical bill of lading is received. Allow us to elaborate further: –

If the date of the Bill of Lading is accompanied by “Received for Shipment”, it implies that the shipping agent has received the cargo and became the custodian of the cargo in question. However, it does not implicate that the cargo is on board the vessel yet.

Shipped on Board Date

On the other hand, a bill of lading dated as “Shipped on Board” implies that the cargo is on board the vessel.

Clean on Board Date

Clean on board dates are also very rare. In most cases, the vessel operators are not responsible for the conditions the cargoes are in when they receive the cargo. This is also why the Bill of Ladings often adds the term “Said To Contain” in front of the description of the cargo.

It is not feasible for vessel operators to check each and every cargo container. Even more so, they do not have the depth of knowledge of the cargo that the cargo owners have to inspect the received goods.

But there are situations that warrant shipping agents to issue a Bill of Lading with a Clean on Board date.

Draft Bills of Lading are not to be mistaken as the Original Copy Bill of Lading. It is a practice where freight forwarders issue a draft bill of lading to the cargo owners to authenticate the information detailed on the Bill of Lading.

Since there is no clear format for a draft bill of lading, cargo owners may mistakenly accept the draft bill of lading as the original copy bill of lading. Therefore, we like to point out that the Bill of Lading will only be issued after the vessel has sailed, and the applicable freight and port charges are cleared.

Vessel Operators are at a position to only issue an original copy of the bill of lading once the payments due to them are cleared, holding the cargo they have taken custody over as a lien.

Even a slight delay in the issue of the physical bill of lading can have big ripple effects on the import side of transportation. So, it is best practice to pursue the physical copy of the Bill of Lading as soon as possible.

2 thoughts on “When is a Bill of Lading Issued”